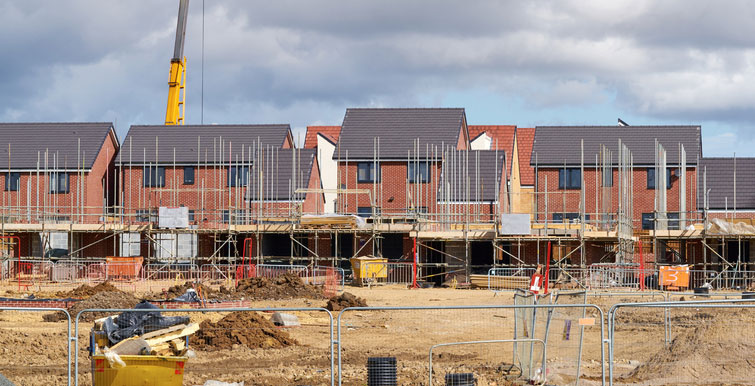 In our last post, we discussed the National Audit Office (NAO) report, Planning for New Homes. The report poured cold water on the potential for property developers to hit the government’s target of 300,000 new homes each year by the mid-2020s. The outturn of 222,000 new homes in 2017/18 was strong, but can this level be sustained?

The ONS report highlighted several roadblocks to delivering the numbers of new homes the UK needs. These include:

Hot on the heels of the NAO report, the ONS has recently produced its own estimate of the number of new homes needed.

Based on net immigration remaining at current levels – 215,000 per year – the ONS forecasts that there will be another 4.2 million households needing homes in the UK by 2041. This suggests that housebuilders will need to complete almost 200,000 new homes each year for the next two decades.

Whether the figure is 300,000 or 200,000 may be a moot point. It could be that government policy stops government policy from working. We know that the government’s handling of Brexit has been a shambles. Their bid to pummel landlords has been a comedy of errors. Now, it appears, their incompetence has spread to housebuilding.

In its attempts to stay in power, the government has been trying to jump on any policy that it thinks would prove popular. The housing market, property investment and landlords have been prime targets. Climate change has galloped strongly on the outside to be a leading issue today. So combining both should be a real electorate pleaser.

This must, surely, have been the thinking behind Philip Hammond’s announcement of plans for a Future Homes Standard in the Spring Statement. One target is for fossil fuel heating systems to be outlawed in new homes by 2025. A worthy cause. I don’t think anyone would argue that we can all do more to help save the environment. New cars are going electric, why not new homes to go carbon neutral?

It’s not only fossil fuel that pollutes

Of course, it is not only fossil fuels that pollute the environment. Plastics are another hot topic (and quite right, too). So are nitrates. In fact, water that is contaminated by nitrates is suspected of causing blood poisoning in infants and stomach cancer in older people. Mostly, nitrates enter the water supply because of inorganic fertilizers used in agriculture.

What do nitrates matter in housebuilding?

Natural England, a government department, has recommended that all new homes must meet strict environmental rules over nitrate levels in South Hampshire. It says that high levels of nitrates are affecting the Solent area. It believes that new housing is contributing to the issue.

Natural England wants developers to build houses that are nitrate neutral. There is, of course, a small problem with this target. Developers have, quite rightly, pointed out that nitrate neutral is impossible. Nitrates are already present in drinking water and wastewater. They cannot build nitrate neutral homes.

Consequently, local authorities in South Hampshire are in a difficult position. They are expected to be issuing planning permissions to boost housebuilding. But they can’t issue those permissions if the development will not meet the need for nitrate neutrality.

Local authorities in the South have taken the only action they believe possible. They have stopped issuing planning permissions. Some councils have cancelled planning meetings. There is no point in holding them. As leader of Fareham Borough Council Seán Woodward said:

“It is a shambles. Government has set us the highest ever housing target, but with another hand they have stopped us being able to issue any permission. The whole system is wrecked. It is a huge issue and it has stopped the planning process in its tracks.”

Nitrate neutral is affecting all developers

All developers are being harmed by this stupidity. Small developers risk going out of business. Large housebuilders face rising costs that will damage margins.

Developers must jump through hoops to assess nitrate levels produced by existing land use compered to that of proposed land use. The rules are challenging for all.

At present, this ludicrous situation has brought housebuilding to a crunching halt in South Hampshire. But developers around the UK should be concerned. Anywhere nitrate levels are considered high could be affected in the future.

To connect with investors and sell the homes you are building, get in touch with Castlereach today. Call the team on 0207 923 5680. Our partnership will help get your new build and off-plan development sales to where you need them to be.